The Forest Has Eyes! Faces Revealed Below! SusieQ FitLife Solutions!

You’ll be amazed to know that the “Eyes Can Trick the Mind that leads the Body to Get a FitLife!” Tell us how many faces you can spot in the photo above & find out the correct answer below to see if you are correct! Tell us how you did in the comments section below, after reading the neurological breakdown!

It is fun to look for hidden pictures in optical illusion games! Celebrity Fitness Trainer, SusieQ wants to challenge the eyes, perceptions, bodies & minds of many FitLifers! Fighting Dementia & preventing Alzheimer’s disease, should be a priority for everyone! The real pleasure behind the SusieQ FitLife Trivia posts on Facebook is to improve the aspects of the cognitive function; of the brain to improve one’s FitLife!

Let’s begin to investigate how the neural processing of faces differs in the left and right halves of the brain. Objects that resemble faces are everywhere. Whether your eyes are puzzled looking at “The Forest Has Eyes” painting by Bev Doolittle, or while observing an “Old Man of the Mountain” granite; our brains are adept at locating images that look like faces. “You can tell that it has some ‘faceness’ to it, but on the other hand, you’re not misled into believing that it is a genuine face,” says Pawan Sinha, professor of brain and cognitive sciences at MIT. A study from Sinha & his colleagues reveals the brain activity that underlies our ability to make that distinction. On the left side of the brain, the “fusiform gyrus” (an area long associated with face recognition) carefully calculates how “facelike” an image can be. The right “fusiform gyrus” then uses that information to make a quick, categorical decision of whether the object is, indeed, a face. 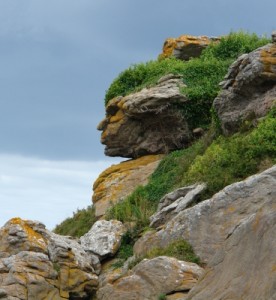 This distribution of labor is one of the first known examples of the left and right sides of the brain taking on different roles in high-level visual-processing tasks, Sinha says, although hemispheric differences have been seen in other brain functions, most notably language and spatial perception.
The research team used functional magnetic resonance imaging (fMRI) to scan the brains of research subjects as they categorized the images. Unexpectedly, the scientists found different activity patterns on each side of the brain: On the right side, activation patterns within the fusiform gyrus remained quite consistent for all genuine face images, but changed dramatically for all non-face images, no matter how much they resembled a face. This suggests that the right side of the brain is involved in making the categorical declaration of whether an image is a face or not. Meanwhile, in the analogous region on the left side of the brain, activity patterns changed gradually as images became more facelike, and there was no clear divide between faces and non-faces.

Neurological Conclusion of What’s in a Face!

Researchers concluded that the left side of the brain is ranking images on a scale of how facelike they are, but not assigning them to one category or another. “From the computational perspective, one speculation one can make is that the left does the initial heavy lifting,” Sinha says. “It tries to determine how facelike is a pattern, without making the final decision on whether I’m going to call it a face.” Key to the research was imaging-analysis technology that allowed the scientists to look at patterns of activity across the fusiform gyrus. Timing is instructive The researchers found that activation in the left side of the fusiform gyrus preceded that of the right side by a couple of seconds, supporting the hypothesis that the left side does its job first and then passes information on to the right side. Sinha says that given the sluggishness of fMRI signals (which rely on blood-flow changes), the timing does not yet constitute definitive evidence, “but it’s a very interesting possibility because it begins to tease apart this monolithic notion of face processing. It’s now beginning to get at what the constituents are of that overall face-processing system.” The researchers hope to obtain more solid evidence of temporal relationships between the two hemispheres with studies using electroencephalography (EEG) or magnetoencephalography (MEG), two technologies that offer a much more precise view of the timing of brain activity.

Spoiler Alert! Here is the Official Solution to The Forest has Eyes!

FitLife Trivia Solutions from SusieQ FitLife! The Forest has Eyes!

A Horse has a Face! Of Course,Of Course!

There are 14 Faces found in the Forest of the Mountain! There is the Horseman’s 1 Face & 2 Faces of the Horse of Course! Totaling 17 Faces!

FitLife Trivia Fun! The observation sense rate is not scientifically factual & SusieQ FitLife does not believe that anyone is average, rather; all of our FitLifers are Extraordinary!

Get ready to test your eyes, mind, perception, knowledge & skills in order to “Get a FitLife!” on Facebook with SusieQ FitLife Trivia!

No Excuses! You Have 18 Minutes to Get a FitLife! You don't have time to workout but, now you...

No Excuses! You Have 18 Minutes to Get a FitLife! You don't have time to workout but, now you...