FOOD FIGHT! Watch Your Mouth & Get A FitLife! Campaign

Fight or Flight? Are you in a Food Fight every day and don’t even know it? Fighting the urge of resisting certain foods that you secretly love but, they don’t love you back? Watch the FOOD FIGHT NOW! Get hungry for the “Watch Your Mouth & Get a FitLife” campaign launching today with a visually stunning viral video FOOD FIGHT! Never before have you seen anything quite like this! People turn into food to encourage you to sign an online Declaration that will have you motivated to put yourself first and “Get a FitLife!”

SusieQ is our newest ARMED Celebrity Fitness Superhero that teams up with a Disease Fighting Ninja who battles remarkable characters as Ms. Bag of Chips, Burger BIG MAN & the Soda Goes Pop Man! These are real people who have turned into food! You have to see it to believe it! It will impact the way children look at certain foods and simultaneously reveals the battles that adults are faced towards their relationship with food! The analogies revealed within this video are remarkable & it will have you watching this clip several times to see what role you play within the fight! At the same time this video can entertain a 4yr old child! 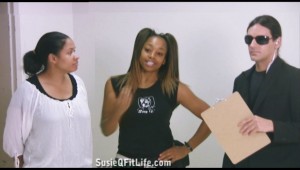 This launch comes at the heels of a direct response to the National Association to Advance Fat Acceptance (NAAFA) Public Relations Director, Peggy Howell. Ms. Howell stated “Studies have indicated that children don’t really truly understand the meaning of health and a good diet until they are around 12yrs old.” SusieQ strongly disagrees, saying “How can children master proper nutrition, while many adults clearly struggle within a dieting culture where obesity is an epidemic?! I cannot find the research findings to back up Ms. Howell’s claims.” This conversation can be overheard in the opening scene of the video. It sparks the need for SusieQ to sign a Declaration, prompted by a Secret Service Agent (depicted by Richie Blackwood); as she urges millions of children and people all across the nation to sign the Declaration form on our DECLARATION page. We need to be committed in taking the necessary steps to “Get a FitLife!” Children are influenced by the actions of their parents or legal guardians. They carefully observe the eating & lifestyle habits of the adults they respect and will naturally act in accordance and follow suit. 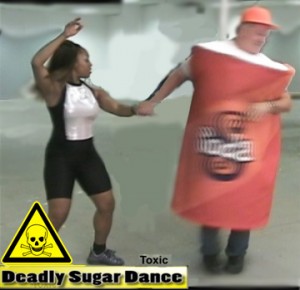 Packed with real food adversaries in action, you might need to call for backup or help when confronted with foods you can’t trust yourself to be around! Is sweetness your weakness? Then you might be doing the DEADLY Sugar Dance! If you feel addicted to sugary foods and characters like the Soda Goes Pop Man (portrayed by Allan Gitlin “G-Man”), then watch SusieQ’s solution as she sings like Lucille Ball to Ricky Ricardo’s Cuban Pete Remix! Should Jim Carey & Beyonce’ feel threatened by this I Love Lucy performance? You tell us! 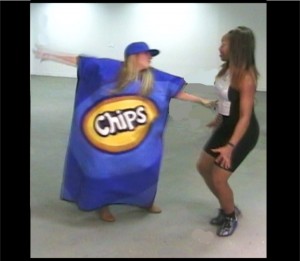 Salty snacks are about to take a hit and we “betcha can’t just have one. Ms. Chips (played by Lauren Francesca) persuades you that chips are good for you! Read the warnings signs as this snack can through you off track. 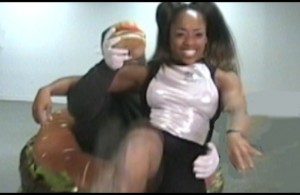 The last ingredient on this greasy menu is the show stopping Burger BIG MAN (represented by Devon Malik Scott) SusieQ says the beef industry can calm down, because she’s not banishing burgers from children. However, as with any other food you need to be cautious of over indulging with large frequent portions that can lead to an array of serious physical consequences listed within the video. So what role do you play? Are you mad at food or do you simply give into temptation as the young woman running scared (emulated by Jennifer Lee) who just gives up?

Tell your eyes to get your tummy prepared! This FOOD Fight will have many people thinking twice about the foods they put into their mouth! Go viral & spread the word. This video is deemed as safe in order for you to Get a FitLife! Please comment, rate, share and Declare with the form listed on our DECLARATION page! 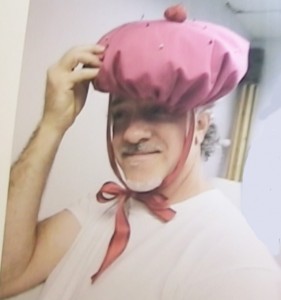 Special thanks: The elaborate & brilliant costumes were all created by the incomparable NYC Artist & CEO of Cesareo Studio, Mr. Jack Cesareo (also known as the Cupcake & Bicycle Man)! Guillermo Cardenas was also our Camera Operator on-set.